Raven Witherspoon is the first VCU student to be named a Schwarzman scholar, and will travel to China to complete a master's degree in global affairs next summer. 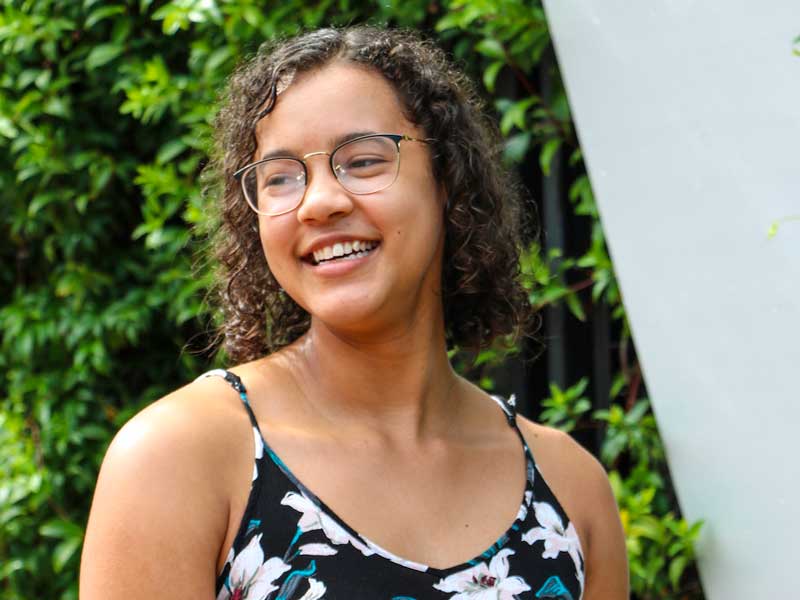 Raven Witherspoon, a member of the Honors College, is Virginia Commonwealth University’s first recipient of the highly competitive Schwarzman Scholars graduate fellowship. Witherspoon was one of 154 scholars chosen from more than 3,600 applicants. Recipients include students from 39 countries and 99 universities.

Scholars chosen for the program have demonstrated exemplary leadership qualities and the potential to understand and bridge cultural and political differences.

“VCU and the Honors College are incredibly proud of Raven and celebrate her selection as VCU's first Schwarzman scholarship recipient,” said Scott Breuninger, Ph.D., dean of VCU's Honors College. “Raven's desire to have a positive impact is reflected in all she has accomplished so far, and we are certain that she is only starting to realize her immense potential. We look forward to seeing where the Schwarzman opportunity will lead her next.”

Scholars are selected through a rigorous application process designed to identify leadership potential, academic ability and strength of character. Candidates from over 60 countries went (virtually) before panels of CEOs, government officials, university presidents, journalists and nonprofit executives, among others.

The Schwarzman scholarship selected its first cohort of scholars in 2016, so it is relatively new, said Jeff Wing, director of VCU's National Scholarship Office. However, “it has quickly become one of the most competitive and sought after postgraduate awards,” Wing said.

“It is a testament to Raven's unique credentials that she was selected to be part of the sixth cohort of Schwarzman Scholars,” he said.

Witherspoon — a senior studying physics in the College of Humanities and Sciences with minors in international social justice studies, political science and mathematics — will graduate in May and then travel to Schwarzman College at Tsinghua University in Beijing next August to pursue a master’s degree in global affairs with a core curriculum focused on leadership, China and global affairs. She will live in Beijing for a year of intensive study and cultural immersion, which will include attending lectures, workshops and discussion groups and opportunities to meet and work with mentors and leaders from a variety of industries.

Witherspoon is excited about studying in China and learning more about the country.

“I’ve loved Chinese language and culture since I began learning Mandarin in sixth grade, so the opportunity to learn about international relations at one of China’s best universities is a dream come true,” she said. “I will get to practice my Mandarin. Everything aligned perfectly.”

After she completes her master’s degree, she would like to pursue additional graduate studies in health physics and nuclear nonproliferation, she said.

When she learned she had been selected for the fellowship, she was speechless.

“I still haven’t processed it,” she said. “It doesn’t feel real. I’m still pinching myself.”

Witherspoon applied for the Schwarzman Scholars fellowship through VCU's National Scholarship Office, which assists VCU students and alumni who wish to compete for prestigious national and international scholarships. Students and recent alumni who are interested in learning more about national and international scholarship opportunities should make an appointment to meet with a member of the National Scholarship Office staff.