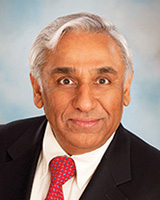 Shiv N. Khanna is a Commonwealth Professor of Physics at Virginia Commonwealth University, having been a visiting associate professor at the Northeastern University (1983−84) and a scientific collaborator at the Swiss Federal Institute of Technology in Switzerland (1980−1983). He is Fellow of the American Association for the Advancement of Science and of the American Physical Society.  He has been the recipient of the Distinguished Scholar Award of the Virginia Commonwealth University and has been twice the recipient of the Distinguished Scholar Award of the College of Humanities and Sciences at VCU. He has co-authored more than 250 research publications in refereed journals, has edited six monographs, has given more than 100 invited talks including two plenary talks, and chaired/co-chaired several International Conferences.

Dr. Khanna and his group are involved in theoretical studies of the electronic structure, magnetic properties, and catalytic properties of atomic clusters, cluster assemblies, and nanoscale materials. He (with colleagues) proposed the concept of “superatoms” that extend the “Periodic Chart” to a third dimension and could lead to novel materials with tunable properties and potential for applications in numerous areas.